is it time to leave oakland?

I recently returned from a trip to Spokane, Washington. My husband and I went there to do a preliminary assessment of Spokane's real estate market and potential as a possible future home for us.

It was not randomly chosen. It's beautiful, outdoorsy, with a river running through it and more city parks than I have ever seen. I was born 100 miles away from Spokane in Moses Lake, and lived in Spokane for a time as a child when my mom was in grad school. I liked Spokane when I was a kid, and I have two artist friends who live there now, so that provides a link back into the place.

My husband and I are finding ourselves in that horrible spot that you hear about all the time, but you hope to never experience yourself. Our beloved Oakland has hit the big time-- this article made me and everybody I know cringe with a bit of horror and outrage --and we are finding ourselves priced out of the city that we have lived in for 20 years. 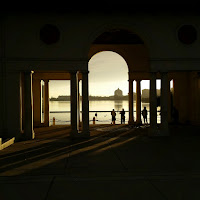 We have felt the creep for years, so it's not a surprise. Oakland's hidden charms and diamonds in the rough have been coming to light more and more as people look for alternatives to San Francisco. It's the same reason we moved here; we couldn't compete for housing in San Francisco during the first dot-com boom of the 90's, but the stakes were different back then. We saw the potential of the city, and believed in its intrinsic strength and beauty despite what many saw as a blighted and crime-ridden area.  By chance we happened to settle into what has become one of the most desirable neighborhoods in the city around Lake Merritt.

Right now we have a pretty decent 2-bedroom apartment with both of our studios located within 30 seconds down the street. Because we have rented all of these places for well over a decade and have fairly non-predatory landlords along with rent control protection, our overhead is manageable, less than half of what we would pay if we were just starting now. I really wonder how younger Bay Area artists today can manage, if they manage, and do they even try?

But it hangs by a thread. All it takes is one landlord deciding to sell their building, or some other unpredictable event for us to be in an untenable situation. One-room studio apartments that used to sit empty for months for lack of renters a few years ago are now going for $2000 in our neighborhood. And people are lining up to rent them.

For us, buying a home here is not an option.  Houses with no heat, rotting window frames, foundation problems and leaking roofs can easily be bid up to over $500,000. We could move to the fringes of the Bay Area for perhaps a few hundred thousand dollars less, but why? We like the Bay Area, but we love Oakland. And part of what makes Oakland so livable for us is the easy access to our friends and cultural life we enjoy. We don't have to get in the car to do most of what we need to do, we can often walk or ride our bikes. That makes our lifestyle buffered against many of the things that make city living kind of stressful. Do I want to give that up so I can hang on, keep my feet planted in the Bay Area?

It's very painful. I moved myself to California when I was 18 because I always wanted to live here and I felt instinctively that I would find my place here, that I would find a sense of belonging. And I did. But it's almost 30 years later now, and the lifestyle that we love so much continues to be eroded not only by overpopulation, gentrification, and the real estate boom, but by the catastrophe of our current drought and continued environmental degradation. I have to ask myself if staying with my Oakland tribe is the smart move. If staying in California at all is a wise choice. Or if it's time to create something new, somewhere else.

Also, as an artist who contributed to Oakland becoming a mecca for creative types, I feel the sadness bitterness of being kicked out because I don't have enough money to stake a real estate claim. People say they want the cultural life and diversity that artists create, but what is being delivered to us are new and better restaurants-- sorry, not restaurants, but "kitchens"-- and bars. What was revolutionary, offbeat, edgy, and different has mutated into high-end retail with a strangely conformist feel. And it attracts residents who mistake gentrification for culture, which in turn propagates more of the same. How long it will be before downtown Oakland turns into a clone of Los Gatos?

I know my complaint is an old one and not even the most poignant or compelling. My own move to this city in 1996 was an early signal of the incoming wave of gentrification, and my choices and tastes have helped to shape it. There is no denying or getting away from that truth. People who have lived here for generations and should be benefitting the most from an improved city and public life are getting thrown out of the Bay Area as if none of their contributions matter, and that is far more painful than our dilemma. And many don't have the same choices that I'm privileged enough to have.

Meanwhile, who out there lives in Spokane? I'm going to need more than two friends.
written by Whitney Smith at 9:19 AM