the way of the half-ass

I've mentioned before that I am a recovering perfectionist. One of the ideas that I've embraced since going into recovery is the idea of half-assing it.  The mantra that goes with half-assing it is: "Half-ass is better than no ass".

The idea first came to me around how I exercise. I'm one of those people who decides I'm going to get in shape and then sets up a whole regimen: daily routines, a DVD workout set from Jillian Michaels, a little notebook to mark my progress, etc. And I'm good with that for a few weeks or a month or whatever. But then... I get lazy, and I miss a day. Missing a single day is as good as driving the train off the tracks and into the gully, and I know it. I know that as soon as I am achieving at less-than-optimal standards, I give up. It's a symptom of my perfectionism.

But one day I was floundering with my exercise routine, and I decided that rather than skip the whole thing, which was my inclination because I was short on time that day, it would be better if I just took the 10 minutes I had a do some squats and some pushing around of the arm weights and that would be okay. It was half-assed compared to my usual effort, but also literally better than nothing, and the easiest and least I could do while still doing something. It also kept the train on the tracks. Since I came to the Way of the Half Ass, I've been getting more regular exercise.

Half-assing it also goes hand-in-hand with doing the easiest thing that is available to you rather than not doing it because you can't trust or value something that's too easy. This is another aspect of perfectionism: one must unduly suffer. If it's easy, it ain't worth doing. I really believed for years that I was not expressing my deepest artistic self unless it was hard and I was suffering in some way. But really, I think it was a finely tuned fear and procrastination system. I have been so much more creative in the past 18 months because I don't care as much about making "perfect" things anymore. I don't even care about finishing if I don't feel like it.

I think a lot of people out there who are running art-based businesses flounder with things like marketing and creative development because they think they can't do it unless they do it 100% "right", locked in with a beginning-to-end plan, executed with perfection. I say fuck that. Floundering around and doing things whether or not it's "the right way" or shows you at your very best creates its own forward momentum that is more valuable than sitting around in your studio thinking about all the things you're going to do as soon as the time is "right".

It's the things that I don't half-ass that haunt me more than the half-assed things I do. Right now I'm feeling overwhelmed by putting together a new marketing and promotion plan. I have to reach into new areas to get my work out there because my old way of doing things is not working anymore. The fact that I'm overwhelmed is my own little clue that I'm struggling with my perfectionism, and then nothing gets done because the whole thing makes me uncomfortable and I would rather procrastinate. It would be a far better thing to think of a few of the easiest things I could do right now-- send off a few emails to showrooms, ask for help-- than to sit alone in my head.

The bottom line of half-assing-- so to speak-- is not about lowering your standards, but about being kinder to yourself.  Stop with the lashing of the whip, stop with the impossible ideals, stop with the procrastination. Half-ass it. You'll feel better. 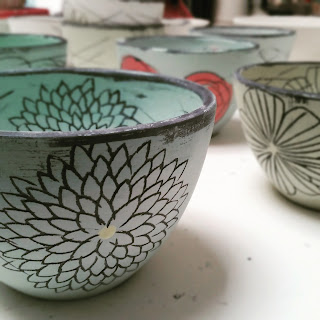