I got up at 5 am today so I would have time to write a post. The lack of blog writing has been jabbing at me. I haven't been writing not because I don't want to or have nothing to say. In fact it's been the opposite which is what makes that jabbing so painful. I haven't picked up a pen to write anything for myself in months.

Almost all of the time I have in the morning for writing has gone to re-designing the ACGA website. It's a project I started in January. I've been a part of this association for over 15 years and our website was so out-of-date that it was becoming embarrassing to send people there to get information. My good friend offered me some golden life advice that he said has been a guiding principle for him: never volunteer. Also, since he is a criminal defense attorney: volunteer nothing. I have no regrets in doing the work, but it cost me many hours of writing time. The website is officially launched, and I am managing all of the content until we can get more people to help. It's overwhelming, and while the hardest part is over, it's still taking all of my writing time.

By the way, if you are a clay or glass artist living in California, please go join the ACGA. I would make a pitch on why you should, but it's 5 in the morning and just go look at the damn website.

Then there are other things. I was putting a lot of energy into getting ready for a solo show at Roscoe Gallery in Oakland. Yeah, that already happened. I didn't even put anything on this blog about it. Here is the card for it though, I think it's beautiful: 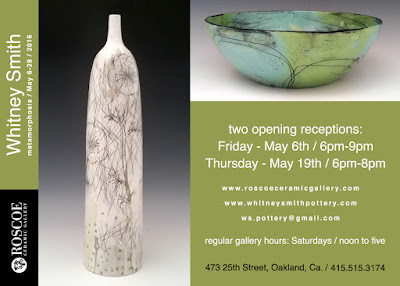 And yes, the show was successful and I was pleased as I can allow myself to be.

About 3 weeks before the show, I got a call from Magenta, the company I've done design and licensing work for. They manufacture pottery in China, and I've been working on and off with them since about 2006, which is crazy. I don't think I realized until this moment that I've been working with them for 10 years.

It's been an up and down relationship. They've been successfully selling a version of my eight nesting lotus bowls for that long, which I get a check for every 3 months. Other items have not been as  successful, and it's been an ongoing struggle for me to figure out how to license work that will be compatible for manufacture. My friend Rae Dunn has also been working with them for almost as long, and her designs have been incredibly successful. Mostly because of the natural charm of her work, but also because of the simplicity of her work, which is easy to-- for lack of a better word-- copy.

The creative director at Magenta has always been a fan of my work, and she wanted me to design a collection based on my new stuff. Even though the new work is the opposite of "simple" in a lot of ways, I liked the challenge and frankly, I need more sources of income. While the new work is extremely gratifying to make, it's been hard to sell it. And if creating a collection based on my current designs can get my look more out there and in the zeitgeist, then maybe I can sell more work and not be concerned that I'm going to die from exposure on a dirty mattress under a bridge. Not that I am concerned, it's just something I think about.

So when I was trying to get ready for my show,  I'm was also designing a new collection of about 15 different pieces. I was working 10 hour days, day after day. Which I'm not really good at anymore. I really noticed that I wold often go home in such a bad mood after working like that. While I miss all the money I used to make when I regularly worked like that, I don't miss that Extreme Bitch Mode at all.

So that's where I have been, and that's what I have been doing. And I have a lot of other things I want to talk about, and I will keep getting up at 5 in the morning so I can do that. I hope you are still there.
written by Whitney Smith at 6:29 AM