cake stand and I are breaking up 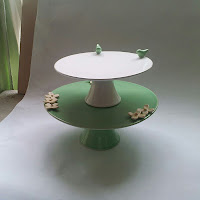 I have a boyfriend, and his name is Cake Stand. We've been together a long time. I realized something recently when I walked into my studio and found all of the cake stands I made earlier in the week with large cracks across the surface of the plate: Cake Stand and I have an unhealthy, co-dependent relationship. Cake Stand is a bad drunk, and I'm the girlfriend who runs around trying to mitigate its problems by thinking of what I'm doing wrong to make Cake Stand go bad, trying over and over again to come up with solutions that will get Cake Stand to come out perfect, excessively babying each piece to the point where my days--and nights-- are dominated by making Cake Stand and I have no time for thinking about other pottery pieces.

I've had problems with Cake Stand in the past, but I was determined to have Cake Stand in my collection so I worked really hard to figure out what made it tick, and for a while, things were good. I took cake stand orders, and I filled cake stand orders.  And I got complacent. I thought we had worked out our relationship and I could relax.  Then late last year, the plates started popping off the stands.  This is not a new problem, and I knew how to handle it. Cake Stand started drinking again, so you throw out all the booze, go to some meetings, and deal with it. But there was an immediate relapse, and Cake Stand started warping in ways I had never seen before. Something was obviously very wrong, but what?  I made another round of stands, and no matter how careful I was, how I babied Cake Stand along,  how many years of knowledge I apply to the making of these dastardly things, Cake Stand has continued to find ways to fuck up. 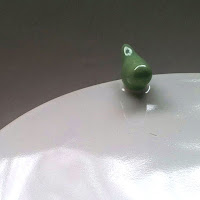 I opened the kiln the other day and both Nikki and I were so happy, a perfect white cake stand with little green birds!  So beautiful!  We lifted it out and it took us both a few beats to realize the entire stand was cracked in half, across the plate and all the way down the base.  There's my boyfriend, trying to act sober and telling me he's going to go have coffee with his sponsor, and then getting arrested in a bar fight an hour later. 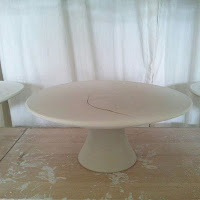 When I looked at the row of cracked stands, I went into my codependent pattern: I thought about my week ahead, and I pictured myself bent over the wheel, going through a box or two of clay, throwing another round of stands, delicately trying to manipulate them into perfection.  The thought made me feel bored, constrained, grumpy.  I wasn't even angry, just passively accepting that my upcoming week would once again be spent nursing the boyfriend, calling his boss to say he can't come to work because he has the flu, and putting aside all of my own plans. Then I had another thought.  I thought, "I can break up with Cake Stand" I thought, "I have three orders right now, I can just refund them, and walk away." I thought, "Wow, who knows what I could make if I didn't have to spend so much time taking care of Cake Stand."

Maybe I need some therapy, because after I took down every listing for cake stands on Etsy and my website, I immediately started thinking about a new Cake Stand.  This New Cake Stand will be different, it won't be able to do the things Old Cake Stand did because it will have a new design, a new look, and new production method. It will be different this time, I just know it! 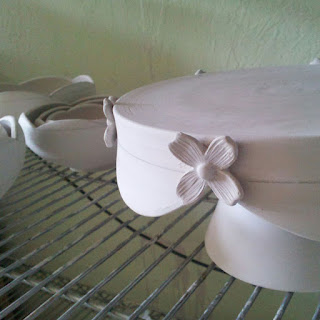 Email ThisBlogThis!Share to TwitterShare to FacebookShare to Pinterest
Labels: dealing with failure, life