get out of the studio!

One of my challenges as an artist is getting out of my studio and interacting with the art world and other artists. When I first started making pottery, I had no interest in taking workshops or even looking at pottery. 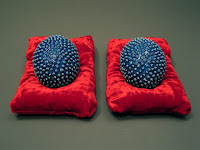 I was zeroed in on making pottery like a laser, completely obsessed. If you got between me and my wheel, watch out! As I got be be a pretty good potter and people started looking at my work, I would always be asked who my influences were, did I know this potter, or did I like that potter? These questions would usually be met with a blank stare and a shrug. I was only interested in making pottery, not looking at other people's pottery or talking to other potters.

My approach has changed over the years as I've started looking up from my wheel and around the world of pottery. When I did my residency in Japan last summer, I finally realized that I must get out more, take some workshops, and hang out with potters whenever possible. Potters, by the way, are the friendliest and most unpretentious group of people you will ever meet. And no one can understand your pain the way another potter does.

Last weekend I had a pottery extravaganza weekend. My pal Nick, 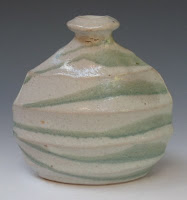 who I met in Japan last summer, drove from Tahoe with two friends in tow, Roger and Kat, who both teach at Sierra Nevada College. Nick and I went to an all-day clay symposium at the Firehouse Collective and got to watch and learn from Craig Petey, Arthur Gonzales, and John Toki. John Toki, by the way, built a four-foot high sculpture in 1 hour.

We went straight from there to Trax Gallery to watch a talk given by Akio Takamori. I bought one of his amazing cups. At Trax I hung out with Christa, Rae, Sara; talked to Andrew Martin about mold-making; crabbed with Bob Brady about annoying customers; stood near Akio so some of his magic could rub off on me. Then I 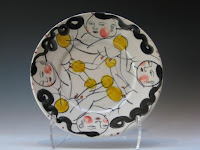 was introduced to a couple of girls who are obsessed with woodfire and invited me to fire with them this Spring. I was very excited by this because I haven't woodfired since I left Japan.

The party went late into the night, and I must say I was totally hungover the next day. But I felt totally invigorated by my interactions with so many ceramic artists, and it reminded me that I need to get out of the damn studio more often!
written by Whitney Smith at 9:10 AM 2 comments: Links to this post