I've been learning a lot about my making process as I work my way through the very large Japan order. It's interesting that no matter how long you've been doing something, there's always more to discover. I learned so many har 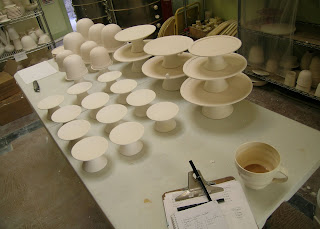 d lessons with the five-figure order and I've been determined not to make those same mistakes. The biggest mistake I made was not being organized and plotting out my production schedule. I procrastinated, and then backed myself into a very uncomfortable corner when there were glaze issues at the very end.

With the Japan order, I've been totally organized. I made a production schedule. I inventoried my glaze and ordered the extra I would need. I made a list of all the parts I would need: 180 individual cherry blossoms, 60 birds, 80 small cake stands, etc. I called my man Hector at the factory and gave him a heads up that I would need extra attention and pieces right now. I hired some extra hands and put them to work. No procrastinating.

What I've learned in the past month is the importance of pacing yourself. When the order rolled in, I got anxious and busted out almost half of the bell jars I would need for the order in one afternoon. The problem was, with all the other 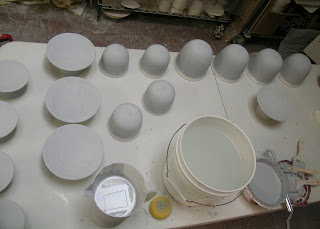 stuff that needed attention-- including other orders not related to the Japan order-- there wasn't time to trim and decorate all the bell jars I made. We only manged to deal with the ones I would need for the first round of glazing and firing, the rest have been wrapped up tightly in plastic and have been waiting their turn for over two weeks. So really, that afternoon I spent making all of that stuff was not really time well spent, all it did was temporarily assuage my anxiety. Which was maybe worth it for that day, just so I could prove to myself that I could throw the entire order in three days, if I wanted to. Which I don't, really.
Pacing yourself is totally related to organization too. Knowing what I need, as well as when I need it is part of the whole picture; not getting too far ahead in one area, only to fall behind in another. It's been challenging to stay on course, because I generally set my stride from instinct, rather than going by a tightly paced list of needed items. I think most artists are probably the same. But it's working for me; by Thursday I should have 50% of the order glazed up, which gives me four more weeks for the rest!
written by Whitney Smith at 10:03 AM 6 comments: Links to this post