Yesterday I was recalling the first time I participated in a presidential election. It was November of 1988, four months after I turned 18. One of the first things I did as an 18-year-old was register to vote.

I remember my first polling place, a little church just a block off the beach in Santa Cruz. I was excited to vote for my candidate, Michael Dukakis, even though he was not favored to win against George H.W. Bush. But as a citizen, and someone who cared about politics and representation, I felt that it was my duty and obligation to vote, and I did it with pride and enthusiasm.

I was raised to care about what's going on in the world, to pay attention, and to engage. I have not missed an election in 28 years. Despite the convenience of mail-in ballots, I like to go to the polls on election day because I like the feeling of communal participation.

My preferred candidates usually do not win, the issues I care about often do not pass, and I carry on and vote anyway. I'm a part of the system, and as broken and backwards as I've come to know it is, I refuse to be sidelined by it.

I spent most of yesterday trying to find comfort, and solace, and words of wisdom. I talked on the phone with people, I went to see friends, and they came to see me, and I realized there is no comfort, there is no solace.  The intense sadness and discomfort millions of us feel cannot be escaped, or glossed over with hope. That doesn't mean there is no hope, but we have to do the work to create it. It's not going to be handed over.

We have to acknowledge what has happened, and sit with it. Our natural impulse to try and make the best of it and look for silver linings might give us some temporary relief, but I think we must resist the urge to do that. And not just in the current political reality, but in life I think we could all try a little more to feel our feelings and not try to numb ourselves to them. Go through the pain and not around it. I believe that's where we find the path and the strength to evolve and change.

I did find some words of wisdom, which were this: The stars are still in the sky, the world is still here, and so are we. 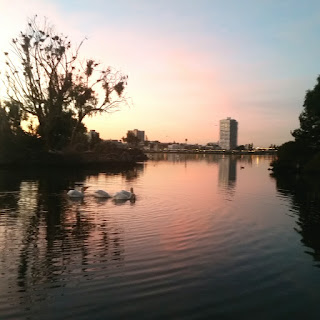 written by Whitney Smith at 8:38 AM 2 comments: Links to this post