publicity, or my martha story

About 18 months ago, I was sitting at JFK waiting to get on a plane after another disappointing, soul-killing, wholesale show. My cell rang, and it was an editor from Martha Stewart Weddings. I actually said to her

, "I've been waiting for your call, what took you so long?" She laughed. She wanted some of my cupcake stands, pronto, for the magazine. I don't think I have to tell you that landing a spot in Martha is the equivalent of winning the publicity lottery. I sent the cupcake stands, and waited for my free copy of the magazine that they usually send you when your item has been featured in a magazine. A couple of months go by. Finally I email the editor and ask what's up? She kindly informs me that I've been bumped to the website only. Another 6 months go by, and I get another call from her asking for a collection of cherry blossom stuff, in pink. I send it out, fingers crossed. This time I get my magazine, and I almost hyperventilate with excitement, my head filled with visions of the massive retail orders I'm about to receive. I look through the magazine, once, twice, three times. Where the hell am I? I finally find an image of my cherry blossom plate, about the size of a dime, on the fold in a mix of other product. Worse, it's layered on top of another plate, making it look like I've made that plate too. To date, I've only received inquiries about that plate underneath!

It is impossible to underestimate the importance of publicity for your business. The first time I received some major publicity 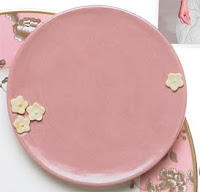 was a feature article on the front page of the "Living" section of the San Francisco Chronicle. Since this was back when newspapers were still major sources of information (2004), it generated a lot of attention, which equals a lot of orders. I had a retail show soon thereafter and I literally had people lined up all day long, which was a first. Still hoping it's not a last. After the Chronicle interview, I was able to pay off my student loan. It was also a small launch pad that took me up a notch in recognition, and generated more publicity. If you look at my press page, press mentions have steadily followed after that interview.

People always ask me how I get press, and my honest answer is, "not much" which is totally unhelpful, I know. That Chronicle article was generated by a publicist the Clay and Glass Association of California hires to promote the Clay and Glass Festival, but every other press thing has been editors and writers finding me.

I'm considering hiring a publicist who specializes in working with artists. When I was first starting out and thinking about generating press, I read about how artists are supposed to put together a press packet, and send it out to editors. I've never done that. I'm not sure what the protocol is nowadays, with all of the distractions and information flowing. One thing I do know is editors at magazines, blogs, etc, need to find us, they want to find us, because fresh, interesting "product" is essential to keeping their readers attention. What have you done to get publicity? Or are you like me, just laying around and waiting for it to come to you? I'm still waiting for Martha to call again, I think third time has to be the charm.
written by Whitney Smith at 7:25 AM 13 comments: Links to this post