Sometimes I wonder if just because I can sell something, if that means it's worth making.  I ran smack  into this recently as I pondered Valentine's Day.  Every year I think about scraping off some of that Valentine market, because it's a huge market.   Did you know that Valentine's Day is one of the major retail holidays, a billion dollar industry?  And I'm not talking 1 or 2 billion, I mean billions and billions. I want some of that action, but my head is usually still spinning from the Christmas holiday, and by the time I remember Valentine's Day, it's already February. Too late.

And I've been okay with missing out, because I'm conflicted about Valentine's Day.  I love the sentiment of Valentine's Day, but it's nothing but a vehicle for selling stuff.  The  idea of taking a moment to recognize the  love in our lives has been buried under a mountain of bad chocolate, half-dead roses, and stuffed bears made out of non-flammable nylon.  How do you make nylon non-flammable? I have no idea, but I'm pretty sure the process has killed a few rivers in China.  That's not Valentine's Day fault, I'm just saying, there are things that should always be able to burn no matter what. 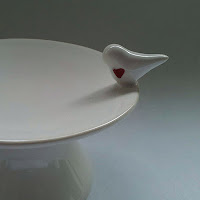 Of course, you can easily say the same thing about Christmas, and I have no compunctions whatsoever about participating in the Christmas sell-a-thon.  So, this year I went ahead and put a bright red heart on a white bird cupcake stand, called it the "lovebird cupcake stand" and put it out there.   I've been feeling totally dirty about it, and I keep asking myself "Why?"  I almost did it as an exercise to see how it would play out, to see if it was worth getting a little dirty for some extra money.

Before I deliver the punch line, here's my little story about my Valentine's Day disillusionment. When I was in my early 20's, my boyfriend at the time brought me a Valentine gift that was totally forced because I made a big deal out of being recognized as the love of his life on this particular day.  The year before, when we were a fresh couple, his Valentine's Day gift was unexpected and spontaneous, showing a real sensitivity and thoughtfulness.   Now, our relationship was on the rocks so this was the perfect way for me to act out and manipulate him into trying to live up to the year before.

Once the deed was done, I felt bad because the gift was merely a symbol of how shitty things were between us. And I realized that had totally bought into the marketing message of Valentine's Day, which is "Show me you love me, buy me something."  From that day on, I may have thrown a few handmade cards around here and there, but I've never really participated in Valentine's Day again.  It just cuts way too close to the heart, and I ain't letting no marketing man get that close to me.

The question I started with was, "If I can sell something, does that mean it's worth making?"  The simple straightforward answer is it depends on how much you want the money.  This Valentine's Day, I wanted the money.  That nasty, dirty, pink and red money.
written by Whitney Smith at 7:35 PM 10 comments: