I was at the Renegade Fair last weekend, selling my work. My college degree is in anthropology, so craft shows are prime ground for studying the culture and human behavior in action. I like to 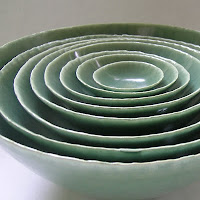 take notes. I am mostly interested, occasionally annoyed at what I observe. Nowadays what I see constantly are parents who bring young children to shows, and then spend the whole time telling their kids not to touch anything. I consider that child torture. I watched a woman scold her six year old daughter: "Look at how cute that is-- don't touch it! Isn't that cute-- don't touch it!" If I have time, I will walk up to these poor children and teach them how to pick up pottery. I know parents think they are doing me-- and by extension themselves-- a favor by not letting their children touch my stuff, but really, they are just totally annoying me and everyone else within earshot. Take some time to help your kid touch and pick up stuff, you'll both have a lot more fun.

Also on my list of annoyances are people who talk on the phone while idly wandering around my booth, like they're in their own kitchen or living room. Feel that gentle pushing on your side? That's me, nudging you out of my space. Most people are so caught up in their phone conversations they have no idea what I'm doing to them until they are out in the middle of the aisle, getting buffeted by the crowd. And then there are the people who have no intention of buying a thing from me but want to tell me what I should be making. When these types start talking to me I make my eyes go really wide and start making a "grrrrrrrrrrr" sound under my breath until they get scared and run away.

These annoyances pale in comparison to a new scourge that one my friends dubbed the "blog paparazzi". These are people--mostly bloggers, some just plain old rude people with cameras (rpwc)-- who think nothing of coming up to your booth and photographing anything they please without so much as a "hello" or bothering to ask permission. This is a trend that I've been noticing more and more the past couple of years, and this last weekend I was inundated with people and their cameras. I had a number of people who didn't even make eye contact with me as they snapped away. I finally busted someone after glaring at them for a good solid 30 seconds while they took images. How anyone could ignore my patented weaponized glare is beyond me. I think they may have been an alien made of Teflon. This person was so surprised and defensive that I could possibly have an issue with them taking images, and didn't understand why I would want them to ask for permission. It could have been an educational moment but since I was pissed, it was probably just more frightening.

Here's the deal, blog paparazzi and rpwc: My work is me, and before you take pictures of my babies, you ask first if it's okay. If you want a picture of my work, you can go to my website or image library and look at all the pictures you want, and even download if you want to. I spend a lot of time and money on having beautiful images of my work out there, and an unattractive snap of my work at a show with bad lighting posted on your blog does not get me excited. If you must take a picture, you can show some basic common courtesy and respect and ask for permission. Why? Because it pisses me off when you treat my work like a public commodity that anyone has a right to take a picture of. Just because people have started documenting every moment of their lives does not mean I want to be a part of your personal archive.

Despite the rpwc and blog paparazzi, it was a really good show and my customers were awesome. I stopped doing any show but Palo Alto because of the poor sales at most of them, but I'm happy to make an exception for Renegade, even if I have to deal with some clueless people. Don't be one of them!
written by Whitney Smith at 9:10 PM 28 comments: Links to this post