they tell me it's spring

I've been living in California for 23 years, and drought conditions are pretty much the default setting for life here. Which, frankly, is one of the reasons I live in California. I like sun-- I have the skin damage to prove it-- I like picnics in January, I like having a bicycle as a primary mode of transportation and not worrying about getting wet or cold. However, it's been raining pretty much constantly for over a month, which sent me into a mildly depressive state that plays itself out in bitchiness and insomnia. How my husband keeps

himself from hitting me over the head with a shovel and then quietly burying me in the backyard is a question for the ages.

Then, I finally hired someone to replace Ruth at the studio, which gave me a spark of hope that maybe I could start getting things done in a timely way again. This someone lasted exactly two weeks before quitting. The strange thing was, I felt this incredible sense of relief. As much as I hate running around my studio like a crazy person pumping out production stuff, I relish being alone all day. It is my preferred mode of being in general. Rather than getting all caught up in hiring the next person on my list-- over 15 people were interviewed for this job-- I called up a few people and asked if they would like to come in on an ad-hoc basis and just lend a hand when I start getting overwhelmed, or better yet, right before I start getting overwhelmed. This seems to be totally working out 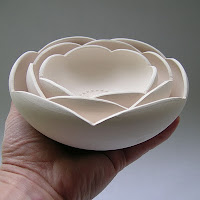 for the moment because these people are super excited to come in, work with me, and earn some extra money, so shit gets done. The two weeks I spent training the other person was incredibly draining-- it's clear to me now I didn't hire the right person to begin with-- and I just can't face starting that all over again right now.

So, I'm feeling perkier now. The hardest thing about depression is how useless everything feels. I've never been so depressed that I can't get out of bed, what's the point when you are just going to get back in at the end of the day kind of depression. My depression manifests itself in discontent with my work, the feeling that making pottery is the most useless thing in the world to pursue. You're just making and making, and for what? Where does it lead, where does it take you? Okay, so it's beautiful-- so what? It's not like you are saving lives. Though, sometimes, even saving lives feels especially useless. And then, I have an (almost) perfect firing, the sun comes out, and I think I'm ready to fight for another day of making pottery. 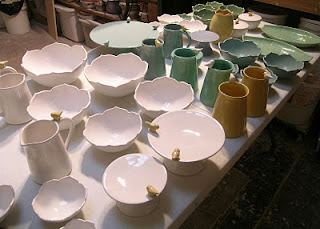 written by Whitney Smith at 1:53 PM 9 comments: Links to this post