I've been in Vallauris for about 10 days now, and I've been finding my rhythm and establishing a pace. I'm the type of person that tries to integrate as much as I can into my surroundings.  It's like adjusting my personal frequency, so I can tune in more acutely to what is going on around me. But still, I never feel more American than I do when visiting a foreign country.

This is the thing about travel: the everyday things you do at home can be fraught with cultural misunderstanding and confusion when you are doing stuff in a place where you don't speak the language. I think that's why a lot of people don't like to travel. It can be exhausting.

My fellow residents and I rented a car to explore the Avignon region, and renting a car meant an encounter with a foreign gas station. A gas pump is a gas pump is a gas pump, but it's the small differences that can throw you for a loop.  I did some research ahead of time so I would know the French name of the type of gas we needed to purchase (diesel=gazole) and a general idea of what to expect, but still, the loops came fast and hard.

First of all, there were about 12 pumps and 4 islands, but only one way to approach, one line.  No organization, no first come first served, just one line that quickly devolved into chaos as you snaked your way closer to the pumps. It was slow going. You had to wait. This immediately made me anxious, especially when we were expertly bumped in line by someone driving a Citroen, almost certainly a native who could smell our tentativeness.

I closely watched everybody fill up, looking at what they were doing and how they were handling the whole gas pump interaction.  When it was our turn, I was armed with observational knowledge and ready for battle.  After we figured out how to open the gas door (something my husband, Andrew, would know by simple osmosis but I have to read the owner's manual to figure out.) I pulled out the hose, stuck it in the tank, and pulled the gas trigger.  Nothing.  I looked at the little window that tells you the amount of gas you are pumping and how much it's costing, and noticed the last person's transaction was still there. Was there a button I needed to push? A lever I needed to pull?  I ran my hands over the pump like a blind person. Nothing. I looked around at other people. Everyone was pumping gas, and seemed to be avoiding my eyes. I pulled the gas trigger a few more times.  James, one of my fellow residents and on the gas mission with me,  commented that the person who was in front of us before had seemed to be standing around for a minute, so maybe we just needed to wait.

James, by the way, was unfazed by all of this.  He was intrigued by the level of female beauty that was circling around us in this little gas station, and temporarily distracted.  I was readying myself for a major confrontation with the gas pump or worse, ask for help, when the window suddenly zeroed out, and the gas started pumping.

The price increased at an alarming rate.  I don't know if you have ever purchased fuel by the liter, but it's a small unit of measure, and the price quickly went from zero to 50 euro for less than a half tank of gas. Again, expected, but still rather shocking to experience in real life.

Not only was there a single line to get to the gas pump, there was a single line of cars to get to the lady to pay for the gas. "Oh my god," I moaned, as I again watched the chaos of little euro cars leaving the pumps and jockeying for position in the pay line, "how can people live like this?  Why doesn't somebody do something about this? How many people get punched at 8 in the morning at the gas station? You have to block out your whole morning just to go get gas!" God, I felt so American, but if there is one thing we have down that the French do not, it's convenience.

"Hmmmmm..." James said, as he waved a pretty lady into the line, ahead of us.

My studio work is going very slowly, because I have frankly been spending way more time checking the temperature of the Mediterranean Sea with my entire body, comparing cheeses, seeing where the best farmer's market is in this region, and running daily tests to see how much French wine I can drink before I get a hangover. As it turns out, a whole lot. 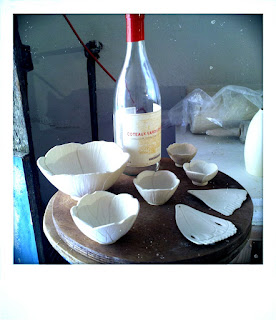 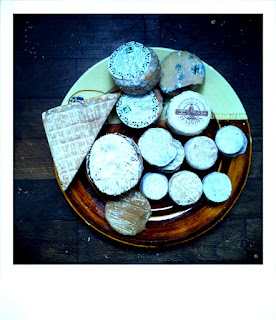 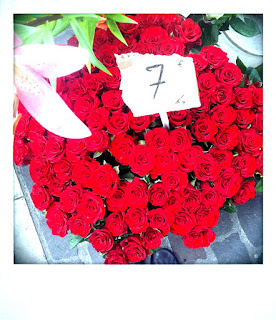 written by Whitney Smith at 5:56 AM 6 comments: