I didn't want to go back to work until September 1, but the combination of August 31 landing on a Monday, and the scary pile

of orders that have built up over the past 3 weeks have motivated me out of bed before 8 am for the first time in weeks. Time to hit the gym-- jeans have been getting a little tight-- then spending the afternoon in the studio. Making stuff. That's what I do!
First, some business. I've been neglecting acknowledging a blog award named the "Lovely Blog Award". Usually these awards involve awarding other people

who write blogs. I'm a wet blanket when it comes to playing these tagging and award games. In fact, I play dead. What can I say, it's just not my thing. But I'll play, albeit by my own rules.
First, I was awarded by Donna Rosser, who writes a lovely blog herself called "The Barefoot Photographer." I'm supposed to award 15 blogs, but since there is no way I'm doing that, I'm going to mention a couple of interesting blogs I've stumbled onto recently that are not already posted onto my blog roll.
Color Me Katie A lighthearted little blog from a person who appears to be the opposite of me. I wish I knew how to be that... effervescent.
All About Cities A fascinating take on the social, cultural, and economic aspects of cities. If I'm ever bedridden for a long period of time, I'd probably read this whole thing.
Get Rich Slowly When I'm freaking out about money, this blog can help me get perspective.
Writing Hannah A funny and sometimes snarky blog from a writer about... writing. And annoying blog comments. And purses. And a bunch of other stuff. It's funny.
Homestead Momma Not my usual blog fare, but I found a recipe for spicy canned beans here and I'm always interested in people who are trying to live more efficiently and frugally. I especially love that she keeps a running list of food produced and preserved on the side of her blog.
It feels good to be back on my usual schedule, and I do feel calm and centered at the moment, ready to tackle everything that is coming up. I realized while I was o

n vacation how I have an extreme stress response every time there is something going wrong at the studio. Like, while I was in Washington, I got an email from someone whose order got broken in transit. Not a big deal really, and she was not upset. But I noticed my heart started pounding immediately, and I had a surge of adrenaline. The same response happened a few days later when I got an email from another customer about another problem. I know that this is the response I always have, and it suddenly occurred to me that maybe having an extreme physical reaction to stress is something I need to work on. Immediately following this thought was the echo of my husband's voice: "You need to relax." A request I promptly ignore. Hmmmm, maybe that's an order I should listen to.
written by Whitney Smith at 8:25 AM 3 comments: Links to this post

Email ThisBlogThis!Share to TwitterShare to FacebookShare to Pinterest
Labels: the daily job

I received a call the morning of my birthday from an assistant at Bride's Magazine. She wanted 6 bird cake stands for a shoot 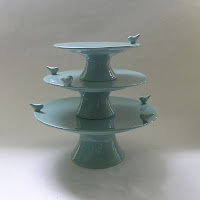 that coming Friday. After I got done laughing, (inside my own mind, or course) I said sure, I'd glaze up the cake stands they wanted and send them out Thursday via overnight UPS so they could have them for their shoot. Remember when I talked about birthday un-presents? This was like another one straight to the kisser. I found it all highly ironic, even amusing, considering all the issues and angst around my cake stands, especially the bird stands.
I had other things to work on, so I just threw the Bride's order on top of my other stuff. I was under the gun from a customer in Australia who also wanted a full stacking set of bird cake stands for her friend's birthday--like yesterday-- and part of another stacking bird set that needed to be finished for a client's wedding. And that's not even including another extra large stand (14 inch) that I've been fucking with since Spring-- another wedding order-- and the customer is so 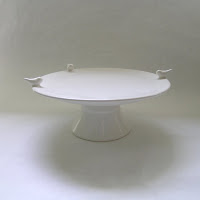 annoyed with me she doesn't even acknowledge my updates anymore. When I went into the studio on Tuesday to glaze all these things, I already decided I didn't care about anything anymore: it could all blow up in the kiln, I'd tell all my customers that no one gets anything because I suck, and life would go on. Of course the firing was pristine and perfect. Which made me think that I need to work more on not caring. But then I would be hardened and blase, like a Parisian whore maybe, and that's not the outlook I want to have. But it's still something to think about.
Unfortunately, no matter how much I thought I didn't care, my fate had already been sealed in a way I could have never seen coming. I called up Bride's to get their shipping account number so I can send out the goods on their dime, and end up on the phone/computer for a good two hours because their account with 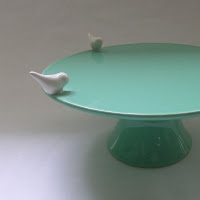 UPS can't be validated. This is an unfortunate way to spend time. As I became increasingly angry with this turn of events, it was becoming ever more clear that Bride's could not give me the information I needed, and this ship was not going to sail. In the end, the stylist for the shoot wished me well--a coded expression I truly despise, and not just because she said it-- but unless I could pay for the shipping and then bill them, they were moving on. I was already in the midst of a full-scale nuclear meltdown, and there was no fucking way I was giving them anything, so we basically gave each other the finger, and that was that.
So many lessons to be learned here, so little time to absorb them all at once. The whole situation so enraged me, I could feel it in my body for the rest of the day. It felt... bad. As a friend succinctly put it to me, "You'll give yourself cancer with that anger." More than once I thought, "Give it up. Go outside. Enjoy your day." But I had this order bet 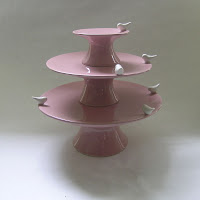 ween my jaws and I was going to shake it until it was dead. Which I did. And then I felt completely toxic, and wrote mean things about them on my facebook fan page, which gave me temporary relief. The next day, when my brain wasn't flowing with hate horomones, I was able to see the situation more clearly, and learn a few things. But what was most clear to me, a serious vacation is no longer an option, it's a mandate. Sanity waits for me on the other side. See ya there!
written by Whitney Smith at 7:26 PM 10 comments: Links to this post