This morning at 10 am, a freight truck came to my studio and took the Japan order. The driver was a young eastern European 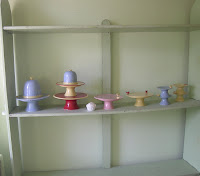 gentleman who obviously thought I was insane as I took pictures of the pallet and slapped a bunch of "fragile" stickers on the wrap. He was gone 10 minutes later. I went back into my studio and cried. My studio felt very empty with this crazy, colorful order gone, leaving a big, empty space. My babies were going to Tokyo! Then I got over it about 15 seconds later when I remembered that I already got paid. I could go to Tokyo.

The order left about 10 days earlier than I planned. Almost 2 weeks ago, I was working with the clients to get the order down to Los Angeles where it would be put into a container and literally shipped to Japan. It quickly became apparent the logistics were not working out in my favor. The order needed to get finished and shipped out now to meet the ship's sail date. There was really no time to panic or get upset. I just did it. And, I was kind of glad. I had a good, strong, consistent pace going for almost 5 weeks. I was ready to sprint and cross the finish line.

I'd like everyone to take note that I have not been writing about about crazy emotional meltdowns or a growing shard pile. That's becaus 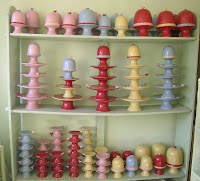 e there is nothing to say in that department. I had a few semi-sleepless nights, especially right around when I took a vacation 3 weeks ago. Thank god I didn't know about the ship date then, because I would have never gone; or, I would have gone and been a basket case the whole time. And I lost very few pieces. I fired 132 pieces, and out of that, I smashed about 4 of them. None of them cake stands either, and there were 28 cake stands in this order. I had a few that didn't make the cut, but are still totally sell-able. Right here, as a matter-o-fact.

I'm not sure why everything came out so good, but here are some theories. One, I took this order right after taking a month

away from the studio. So I was kinda relaxed and ready. Two, I was very aware of keeping a good attitude, which you may or may not know, I have problems with sometimes. Especially when "good" stuff happens. Three, I was very careful. This order took some extra time because of all the layered colors that I usually don't put together, and I gave it all my full attention and never took short cuts. What can I say, it paid off. Here are the lessons, all nice, for those of us who need it simple: 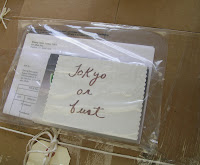 And P.S.: here is a photo album of more pieces and the pack-up. It's on my facebook fan page, so while you're there, you may as well become a fan.
written by Whitney Smith at 3:15 PM 11 comments: Links to this post