how high is too high?

I've been in the zone with pottery making lately. I'm getting ready for the Clay and Glass Festival in July, and every year it's a big push in May and June to get enough work made for the show. Every year I have the same goal: sell $10,000 worth of work. And every year I sell about $5,000.

There seems to be a ceiling, and part of that is because I don't even bring enough work to sell $10,000. By Sunday morning, my booth still has plenty of work, but the discerning eye can see the holes. I'm a master merchandiser, if I do say so myself, but even I can't hide the fact that every small and medium bowl is gone or there are only giant vases left.  This year, I'm not fucking around. I'm cranking out work. There will be enough to sell $10,000 worth. I think.

Or, maybe I don't make my magical $10,000 goal because my prices are not high enough. This thought has been an annoying buzz in my brain lately.

I had a very uncomfortable moment with pricing a couple of weeks ago. A request came in for a custom item, an item I don't normally make, with a specific design on it. I wrote the person back, telling them I can make this thing, but giving them a heads up that it's going to be expensive. They came to the studio and we worked out what they wanted, and even though I had told myself ahead of time that I would not give them a quote at the studio, but give myself time to think about it so I could come up with the appropriately outrageous number, I ended up dropping a number right then and there. I don't know why, which is a question I will be exploring with my internal therapist.

That incident coupled with the upcoming show and the question of my prices has me pondering a couple of things. First, what is the ceiling on pottery pricing for me personally and is influencing that cap? I wonder if I were a man, and asking for 15% more, would I get it? The answer to that question is "yes".  Then I start wondering if I need to present myself in a slightly different way to get higher prices. Because it's not just about the work. It never is.

And I have never been one to under price my work. From the start I've always asked for more, and part of that came from working for Sandi Dihl, and seeing how she priced her work. She always pushed prices higher. But I have been doing this for 20 years now--whaaaaat?!-- and I feel like I have plateaued on price. There are a host of reasons for that, including competition, the global economy, patriarchy, capitalism, blah blah blah, but I wonder about minute personal factors that are influencing my prices, and what I can do to change that up. These are not questions I enjoy pondering. But I think I would be a fool not to.

Back to the customer in my studio who is feeling relieved and surprised that they just saved $500. We talked about the price more, and we came to a price that would split the difference between what I just quoted and what they expected. I was transparent and honest in telling them that I don't always value my own work, which I hate admitting. It makes me mad at myself. But I realized in that moment that if we didn't balance the price between us, I was going to resent the hell out of that order, which would mean I would end up having to make it several times because the first one cracked in half, and the second one exploded in the kiln. That's how pottery works. It often expresses my internal conflicts, which forces me to reckon with myself. And that's why I'm an ARTIST! *confetti falls from the heavens, god smiles*

Here is a picture of some of what I made last week. I had to move work-in-progress onto my studio display shelves, because my ware carts were all filled up. 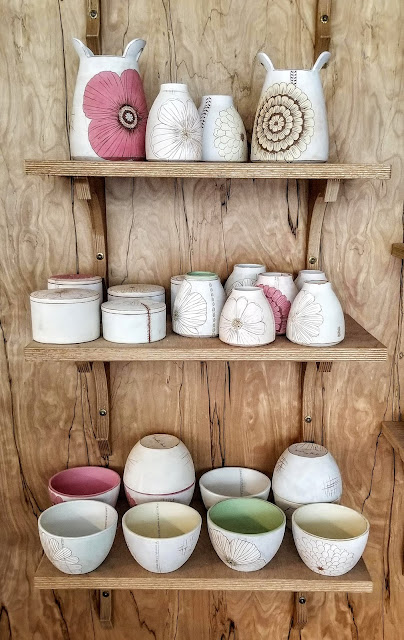 written by Whitney Smith at 8:11 AM 7 comments: Links to this post