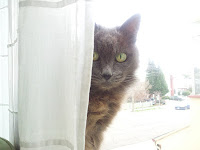 Our cat, Leo, died earlier this week. Our lightfooted and athletic kitty started showing her age gradually, then all of the sudden with a round-the-clock sleep schedule, a stiff walk, and inability to jump on our laps without help. The last week she had to be helped to her food bowl, then her cat box, and then the vet came and put her to sleep. I don't like euphemisms, but I like the word "euthanize" even less. Andrew dug a deep hole in the garden, and we put her there. 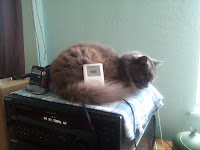 It was one of the saddest days for my me and my husband. We received Leo from a friend when we were first living together in 1997. Leo was just a year old, mostly a kitten. She loved to be snuggled, and she was so hard to put down I would wrap her in a big scarf that I then tied to my upper body, and carry her around like a baby. That's weird, I know. Leo would lay there until she fell asleep, and then I would hang her on a door knob and she would continue to sleep there. She would come when called, very un-catlike in that way. When my husband and I would walk down to our local business district for dinner or errands, she would stalk us for four blocks until we got to a busy intersection, and she would wait there until we walked back. Sometimes that would be an hour or more. 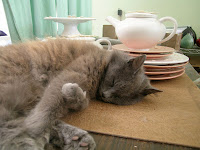 Leo also followed me to the studio almost every day until the past couple of years when she lost interest in being outside all the time. I never worried about her knocking stuff over, she was so sensitive to her surroundings. She would post up on shelves, or next to glaze buckets, or on the floor next to her food dish, willing me with her penetrating stare to run home and get her more food. I always did because Leo was very hard to say "no" to. There was one time where she made a miscalculation and and didn't quite make it up to the next shelf she was jumping for. She swung, monkey-like, claws dug into the shelf she was trying to get up to, and knocked over a huge vase I had just worked on for 4 hours, shattering it. I grabbed her, and wanted to shake her, but how can you really punish a cat? I put her outside and slammed the door. She gave me about 15 minutes to recover and then started meowing to let her back in. Of course, I did.

I've been coping with overwhelming sadness all week. There is something particularly poignant and painful about losing a pet. You are supposed to look out for them, to take care of them, but there is a communication gap. You don't know what they really need or what they are thinking, you can only guess. Leo added so much to our lives, and now, there's just this absence where she once was. The last week she was alive was so hard, because I knew we were about to lose her, but she was already gone in so many ways. She could only lay there, and there was not a thing I could do to help her, except to let her go.
written by Whitney Smith at 10:12 AM 11 comments: