I haven't done a lick of work in what feels like weeks, though it's barely been two. The days leading up to the holidays is a siege, which makes the whole season like fighting a battle. I know how to dig my trenches, lay in a huge supply of ammo, and train my troops. 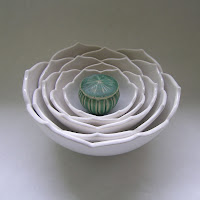 But by December 20, my little bunker was being overrun by a panicked and scattered populace. I was shooting-- I mean shipping out orders right up until December 23, when I finally turned out the lights and retreated to Southern California. Still, I got an annoyed sounding email from a customer 3 days after Christmas wondering where her Christmas present was. It's amazing how I can hear whining even through the impersonal medium of electronic mail. And this from an east coast customer who placed the order 4 days before Christmas. I guess Christmas brings out the child in all of us.

I don't feel ready to go back to work, but then, I never do. It's really a shame that I didn't marry rich, because if anyone was built for a life of idleness, it's me. I've refined lolling around to a high art, and the beautiful thing is, I can do it just about anywhere. Part of the reason I work for myself is because I would never be able to get to amount of vacation days I really need from a regular job.

While I'm thinking about getting back to work, I'm also thinking of the upcoming year, and how I want to make it different for myself. I'm starting by skipping the wholesale show in February, which means I don't have to spend January pumping out samples and coming up with new "product". This also means I don't have an assured stream of income from store orders during the Spring, but after last year's lousy show, I've realized I don't depend on that as much as I thought I did. In fact, the more time I spend selling m 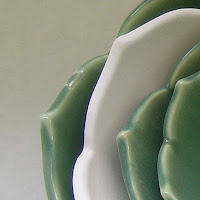 y work at half price to retail clients, the less time I have selling the same work at full price to my own individual clients. Though my own clients can be a major pain in the ass on occasion (see above), I still prefer dealing with them over dealing with stores.

Skipping the wholesale show is about more than just trying to cut wholesale and increase retail. It has become increasingly obvious to me that I need a creative outlet that's not just about ceramics. For a while, I thought that what I needed was more "creative" time in the studio, making stuff that's about making art and pleasing myself. But I've come to realize that that is not what I need at all; what I really need is less time in the studio and more time making other kinds of art. I've spent 10 years building this ceramics business and I've gotten very good at it. Up until now I could rarely think about spending my creative energy doing anything other than pottery. And now, I have a nice little business that can support other projects and give me the time I need to do other things. Like writing, which I love as much as ceramics. And painting, which I used to be good at. Resolutions can be a bit ridiculous and a set-up for failure, but I'm ready to make some changes in 2010. What about you all?
written by Whitney Smith at 2:32 PM 12 comments: Links to this post