a tiny lesson in creativity

I've been painting with acrylics for the last couple of months. I used to paint all the time, and in fact there was a time when I thought I would be a painter when I grew up, but then I met pottery and I dropped painting immediately. I literally have not picked up a paintbrush since 1993.

I started painting again because I realized I make too big of a deal about creativity in general and there is no reason why I can't make pottery and paint. I can paint, and it can suck and be awful, and that's okay, because it's not important and nobody cares. I don't have to sell it and it doesn't have to make me famous. But I can still have fun while making terrible paintings. When I came to this important realization around late August, I ran to the art supply store, bought everything I needed, and started painting immediately. I mean like, right away, that day.

My approach to painting has completely changed. When I was younger, I would start in on a canvas with a very clear idea of what I wanted to paint. It was never as good as I wanted to be, and that was always a frustration to me. I think part of the reason why I was so willing to move on with pottery is because with pottery, I was quickly able to make pretty much what I had in mind. It was way easier and more satisfying and the reward of having something useful when it came out of the kiln was even better.

Now when I stand in front of a canvas, I have only the vaguest sense of what I want to do, and I usually just start with color. When I'm about 30 minutes in, this voice always starts up: "Oooooh... I don't like this very much. I don't know about this.... It kind of sucks, don't you think? Please... make it better before you kill me with your bad taste." This voice used to totally throw me off track, because I used to believe that it knew what it was talking about. Now I understand that it knows nothing  and I just ignore it. I keep ignoring it and after about 2 minutes it fades away. I call this "the hump". I have to just get past that first hump and then I'm fine. I can just keep painting away until I feel like I'm done, and I'm usually pretty happy with what I've made. If the hump comes again, I know it will last about 2 minutes so I just wait it out.

This exercise has totally been helping me with my pottery too. I had this piece, a really big piece that I threw in two parts, and when I put it together, it wasn't matching up in the way I envisioned. I wanted it to be a smooth bullet shape, but it had a little curve where there two piece met and I didn't have enough clay to trim it into shape. I did not like it. But it was so damn tall-- 22 inches!-- and I had put so much work into making it that tall that I wasn't going trash it. I decided to approach it like a painting, not give a shit if the surface decoration was good or not, and just have fun with it in the exact same way I am having fun painting.

As it turned out, this piece ended up being one of the strongest in this collection of vases of tall vases I made for a gallery, and it sold for over $1000 within a couple of weeks.

So what is the lesson? The lesson is to have fun with your creative work, of course, and not to focus on the outcome but on the process. But it's also about taking the time to notice your own process and pay attention to its hills and valleys. I think with pottery I am so used to my process that I don't necessarily take note of some of the negativity I bring to it. But painting is feeling so fresh to me at the moment that I really notice all the feelings I am having with it, and then when I immediately move on to making some pottery that action of noticing myself and my feelings is still there. It's very helpful. On difficult mornings when I feel like I don't know what the hell I'm doing, which is really all the time, I just whip out 30 minutes of painting just to get things going, and to prime the pump of not being too attached to any particular outcome.

If you are looking for an assignment today, here's one: go get some supplies and make something that is out of your wheelhouse but you think will be fun. Go get some fimo, some shrinky dinks, some watercolors, some styrofoam and spray paint. Whatever. And make something just purely for fun. Notice what is happening in your head while you're making it. Let me know how it goes. 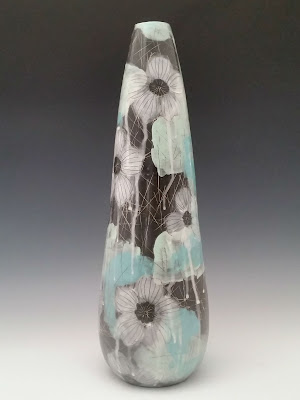 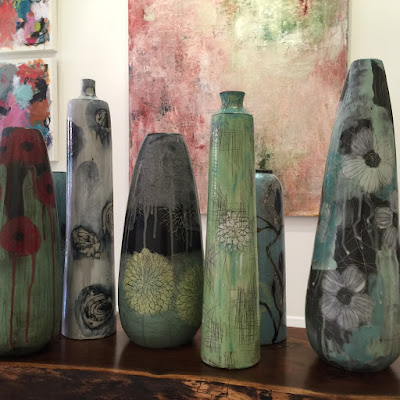 written by Whitney Smith at 8:43 AM 8 comments: Links to this post

The studio will open at 5, and my vision is that people who want in on the sale part of the party will come early. All my regular priced items will be 15% off between 5-7 PM. I will also have every last second on a special table, along with randoms, orphans, one-offs, and prototypes. It's a space clearing exercise too.

Around 7 PM I will turn up the music, and perhaps dim the lights a bit. I will have food and drinks and that kind of thing. You can still buy stuff, but you will have to find me to give me money. Perhaps I will have some kind of special bell you can ding or a balloon you can pop to alert me.

If you are in the Bay Area, by all means, please show up. Here are all the details you need. If you are shy about parties, come early before there are too many strangers to interact with, slip in and out, or bring a friend. 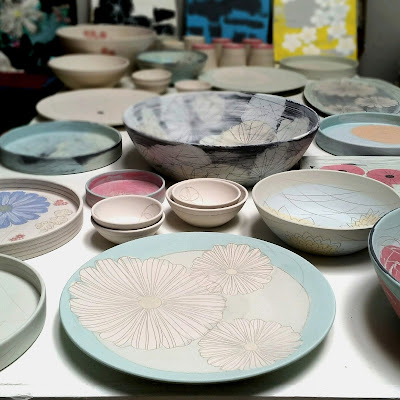