Remember last spring when I stumbled across a major rip-off of my sprout vase in a little gift store in San Luis Obispo, California? Well my man, Mr. Escobar --my hot shit lawyer--pursued the case on my behalf. After a few months of 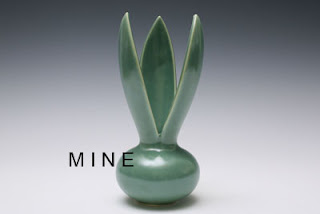 back and forth, Escobar informed me yesterday that the company pulled their copied version of my work from their website and product line. What I really loved is that they actually said in their letter to Escobar "we pulled your client's work from our product line," basically admitting that the work is mine, not theirs. Score one for the little guy! Or in my case, the hot potter chick! Yeah!
Though the case seemed clearly in my favor-- they did such an obvious rip-off of my work-- I have to admit, I'm surprised. I expected them to go to the wall to defend their copyright, and force me to drop out of the game before I drained my own resources. I'm always pushing my own friends to step up and defend their copyright and ideas. I once offered to picket Pottery Barn on behalf of one of my artist friends, who was blatantly copying some of her signature work, as others continue to do today. 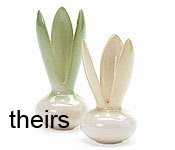 I'm a major stickler when it comes to fairness, and nothing enrages me more than watching people get walked on. Well that, and bad firings. And dirty floors. And, if I'm honest, silverware sliding off the plate and clattering onto the floor also totally pisses me off. But when I had this happen to me, in a larger venue than I'm used to dealing with I have to say that I wanted to ignore it. It seemed like a major hassle, expensive, and a battle I would not win anyway. I put it off for at least a month before an attack of insomnia made me realize that it may be all those things, but it still had to be done. If I think what this company did is wrong, then it's wrong for me to ignore it.

Now, this is the funny thing: during this whole event, and a similar episode that was happening around the same time, I heard over and over from certain people, "Being copied is the highest form of flattery," and "Coco Chanel said she would shed tears the day no one copied her," and "If you're being copied it means you are great and you should be happy." I shot back my own arguments against these comments and felt pretty secure in my stance. But... when Escobar said they were pulling out, the second or third thought that ran through my head was, "What, it's not selling well enough to pay for their lawyer? They don't think my Sprout vase is worth fighting for?" And with these thoughts came a feeling of insult and injury. I think I understand now what those people were saying, even though I still think it's crappy. Anyway, I'm over all that. I feel vindicated, and that it was worth the fight.

And just in case you were wondering how cute I looked on my birthday, I looked this cute: 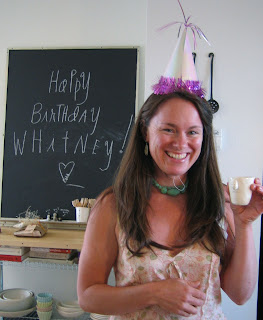 written by Whitney Smith at 11:10 PM 12 comments: Links to this post