My resolution to post on my blog at least once a week went straight out the window once the holiday season swept in. If the 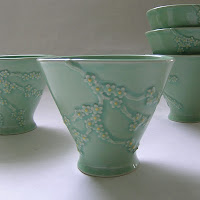 holiday season were a person, it would be dressed as a terrorist or maybe a special forces black ops dude, who kicked in the studio door while I was trying to take a nap, and started sweeping all the stuff I stockpiled into shipping boxes, all the while screaming that he needs more cupcake stands and bird vases now now now! Just take a look at my sold items for the past week if you want to get a sense of the situation. I thought I had a good stockpile of stuff going, but I was wrong, again. That pile was exhausted a week ago.

The weird thing is, though, I feel totally good. I've been working 10 hour days which is, like, against my religion of laziness, but I've been keeping this very tight schedule of exercise, no drinking alcohol-- during the week anyway-- taking my vitamins, going to bed early, and eating lots of salad and vegetables and stuff. No burrito eating for lunch. And I've been sleeping like a baby night after night which is really 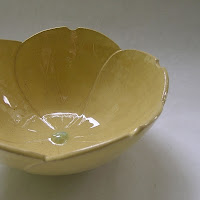 weird. And when I say sleeping like a baby I don't mean crapping my diaper and waking up crying every 2 hours. I mean I'm falling asleep immediately and waking up at 6 am.

Then I did this other crazy thing which was totally skip out on doing any shows except for Renegade the weekend before Christmas. I'm not even doing an Open Studio. Usually I'd be dashing here, dashing there, doing trunk shows, pop-up shops, holidays fairs, cleaning the studio for customers, blah blah blah. I just decided to skip this year. So, even though I'm totally busy, I'm also pretty relaxed. And I have my December weekends open for doing other things, which has not happened in years.
written by Whitney Smith at 10:49 AM 8 comments: Links to this post