I ride my bike pretty much every where I go, so I look at a lot of bumper stickers on the back of cars. The other day I saw a sticker I've seen hundreds of times: Let go, let God. I felt a twinge of annoyance the way I do with platitudes involving god, and continued pedaling, quickly forgetting about it. Then, I found myself pondering the meaning of this saying the other night at 3 am. One would think I must love to be awake, thinking about stuff at 3 am, since I am often doing just that in the middle of the night. After years and years of training, I'm 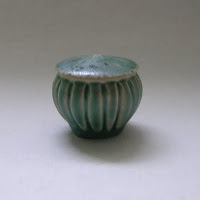 better at putting myself back to sleep within a few minutes. A warm bottle and my wubbie does me right.

But there are times when I can't go back to sleep, and it's usually because I'm obsessing about something, often related to my work. In this, I am no better than your typical high-strung corporate exec. For several nights in a row last week, I was completely absorbed all night long with these international packages I was shipping out. These boxes all had a lot of heavy, expensive items in them, and had already been packed them very carefully, but my subconscious was not satisfied. While I was sleeping, I was packing these boxes. Over an over: bubble wrap, styrofoam peanuts, corrugated cardboard. It was basically the opposite of a sex dream. While I was awake, I was re-thinking my packing strategy. In the end, I unpacked the boxes and re-packed them. During the day, not at 3 am. I'm not that crazy.

And a good thing too. Since these packages were international, they ship via US Post. This always makes me nervous, since the postal service does not feel the same obligations toward their customers the way FedEx or UPS does. Don't get me wrong, they suck too, but you can at least get your problem dealt with. Even if that means getting totally screwed in the end, they usually do it within 36 hours. I am not a customer of the US Post, I am a prisoner of the US Post, a belief I stated very loudly the other day when I was at my local office 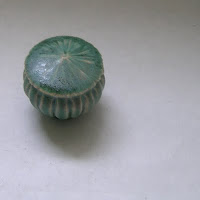 trying to pick up a package. You'd think they might hire two people to work the pickup window during the holiday instead of the usual one. But no. And that's another story anyway.

I nurture good relationships with all of my carriers-- UPS, FedEx, and even the Post. The people who pick up my shipments all know me, come into my studio, check out my work, and are nice humans to work with. My postal guy, who I really liked a lot, got fired last summer. I miss him. Since he's been gone, I've had a series of carriers whose charms are not as obvious. One carrier in particular is very bad, and unfortunately she's the one who shows up the most. I have to stay on top of her to pick up packages, she's always on her phone, and she's not friendly. I don't get unfriendly people; I can be a bitch with the best of them, but I don't move around in life with that attitude as my modus operandi. It's way more fun to be friendly, because it cheers people up, which in turn makes you a happier person. Mean people are just so boring. Even though this woman is pretty unpleasant, I'm still always kind and polite to her, and say "please" and "thank you", and always give her a smile.

Not that this gets me anywhere with her. She came by last week to pick up my re-packed international boxes -- 5 of them-- and I caught her throwing the last two into the back of her van like they were a sack of potatoes. I wasn't watching the first three she threw in. "Hey!" I yelled at her. I rarely yell, because it scares people and distracts from whatever point I want to make, but she was talking on her phone and I wanted her attention immediately. When she looked up at me I said, "Take it easy on those boxes, they're packed with pottery." I didn't say "please" "thank you", or smile. She says, "O 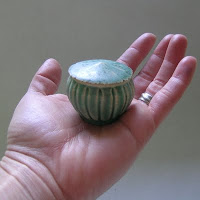 kay" in kind of a nice way, which briefly made me think I intimidated her, and maybe now she'd start being a littler nicer. Then I realized she could afford to be nice since she was probably going to drive around the corner and see how well those boxes really were packed.

That night, at 3 am, I was awake and thinking about all the ways I could get back at the mail carrier. Unfortunately, there were none, except for psycho stuff, and I'm too lazy for that kind of thing. And then I started stressing about the pieces in the boxes, worried about them arriving broken. I soothed myself with the thought that all the pieces were double boxed and fine even if the boxes were tossed around. But my brain wouldn't accept soothing. That is when I started thinking about the letting go, letting god thing. Maybe that saying is not just an annoying phrase that is empty and meaningless. What a great thing it would be if I could let go of my struggles and worries, and accept whatever outcome is coming my way with equanimity. I'm thinking "letting god" just means "acceptance." I always pictured that saying as giving up, and then god would swoop in and deal with the mess, which is probably why I never really bought into this saying. But if I can picture it as gracefully giving up, letting go, and accepting reality without resisting, maybe I can start working this game a little better.
written by Whitney Smith at 6:37 PM 6 comments: Links to this post