I was working on one of my new pieces a couple of weeks ago. It was a large platter-type thing. Wide and flat with 90 degree sides that were just over an inch high. I sketched in a lotus and lily pad motif on both sides over layers of green and blue underglaze, and I liked how it looked. I put well over an hour into the piece when I totally cracked off one side. I got carried away with the detail work and did not realize that I had all the weight of the piece leaning on one edge.

Whenever I fuck something up, my reaction is always the same. First I yell in complete dismay, "Ooooooh NO!" Followed by a series of swear words. Depending on the severity of the fuck up, I contemplate crying and I often put out a couple of experimental sobs to see if it's going to take. Usually is doesn't, because my method for dealing with pottery fuck-ups, honed over almost 20 years of dealing with them, is to immediately throw them in the trash and move on. I can't get stuck on pieces getting broken, it's just part of the process and there's no point in ruminating on it. I'm kind of harsh that way.

But this piece was so nice. I really liked how it was shaping up. Yeah, I could make another, but there is nothing like the magic of the first. And then I just decided to repair the broken pieces, stick them back in their broken spot and secure it with slip, and not even try to hide the fact that it had been cracked, but emphasize it with some black glaze and really show it off. I felt like I was on to something.

Then, last night I was watching the first in a series on Netflix called "Chef's Table", a set of documentaries about some of the top chefs in the world. The Italian chef Massimo Bottura was talking about how one of his chefs dropped a lemon tart, breaking apart the crust and splatting the filling. Rather than freaking out, he was inspired by the idea of this, of presenting the lemon tart broken on the plate to the customer, because he thought it was beautiful, not destroyed. He says that to make mistakes is human, and therefore mistakes can be beautiful. The art comes from being able to see that, and then making the invisible visible for others to appreciate. His broken lemon tart is now a signature dish on his restaurant menu, and it is called, "Oops! I dropped the lemon tart!" Who would have ever thought to do something so whimsical with food presentation? 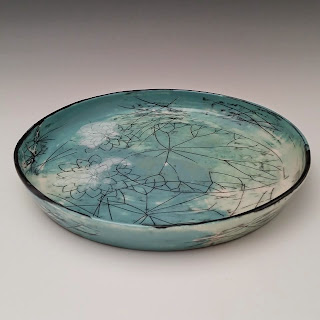 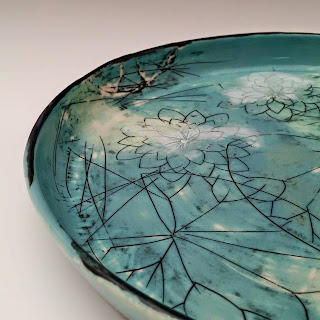 written by Whitney Smith at 9:21 PM 13 comments: Links to this post