I arrived in Vallauris yesterday after spending 5 days in Paris with my pottery posse, Rae, Sara, and Christa. Paris was slightly overwhelming. I was reading The Greater Journey while I was there and that book made me realize I should have made a serious plan in advance.  My laid back California ways basically mean you won't get shit done in a city like Paris, except for whiling away the hours in little wine bars and cafes, walking across a few bridges, and getting lost on charming, narrow, twisty streets.

The only time I am able to speak French with any flair at all is when I need food. I can ask for a baguette like nobodys business. All I wanted to do in Paris is go to the restaurants and outdoor markets and eat as much possible. I would circle patisseries, fromageries, and charcuteries like I was checking out hot men in clubs. In one fromagerie I went into, I said hello and strung together the longest series of words I had managed thus far:

This means "I would like a cheese to eat now or tonight," and I am not sure if that is the right way to say it, but it gets the hint across to a cheese man about what I need, which is a ripe cheese, something ready to go right now. The cheese man said something incomprehensible to me, and because I was trying very hard to pretend like I knew more French than I do, I shrugged in what I thought could be a Parisian way and said, "un chèvre...ou un bleu!?" Like, convince me cheese man, you are the expert! I could go for a goat cheese, or I could totally go for that cheese covered in mold right there! How bout you figure it out?  He pointed at some stuff, and said some things, and I nodded like I totally got it, and I ended up with two wrapped packages, a small little goat cheese, and a hunk of something that smelled like a goddamn barnyard. Oh, I was happy.


I went on to buy a chunk of duck pate the size of my foot, some olives stuffed with almonds, a teeny little basket of strawberries, and a baguette.  The perfect food for happy hour with my pottery posse. I walked and walked with Sara, and we went to the Louvre.  There were several times where the smell of barnyard would drift up to my nose from the bag I was carrying, and as I gazed at the master works of art ensconced in the Louvre, I though about what a great feast I was bringing my friends that evening.


Later, many hours later, as I was unpacking my bag of goodies, I could not understand why I could not find that giant hunk of cheese that smelled like a barnyard. Let me say that I had several large glasses of wine already, so I was easily confused.  I pulled all of my booty out of the bag, and turned it over several times. Everything was there, but the big hunk of stinky cheese was not there. Then, I looked at the bag that the cheese man put my cheese in.  The cheap, plastic, piece of shit bag that had a hole in the bottom the size of a big hunk of cheese. The cheese slipped out of that hole, and it was gone.


I dont know if you have ever lost your cheese before.  But me, I have lost my cheese. First, I was in disbelief.  I looked in the olive container to see if the cheese was there. It was not there, and I could not believe it. Then I was in denial. The cheese had to be somewhere! I started looking all over the kitchen, even though I had only been in there for 30 seconds and did not have time to do anything but pull it out of the bag. Then, I got angry. I threw the stupid goat cheese I had left. Stupid goat cheese, I can get you anywhere!  Where is the cheese I really wanted! I ran back to the place where Sara and I had those gigantic glasses of wine, and looked everywhere. People helped me when they heard I lost my cheese, but it was not to be found.  I ran to another fromagerie around the corner, but the store was shut tight, as was everything else.  I thought about crying, but that seemed extreme, and maybe a little crazy. So I just got really, really sad. And then I cheered the fuck up, because I was in Paris, with my pottery posse, and I still had that pate. Thank god I did not lose the pate also.


Some favorite pictures from Paris. 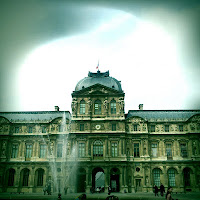 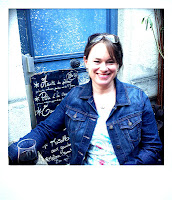 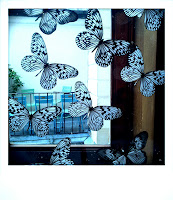 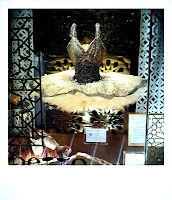