This past week I've been working really hard, trying to get ahead of the overwhelming order, while also catching up with my orders from August. I haven't worked hours like this in a long time: yesterday I was in the studio at 7 am and stayed there until 4:30. I had to immediately go and drink a martini afterward, but after a lo 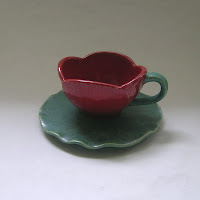 ng day I think the reward system should be in full effect. I almost forgot it was possible for me to work a straight 8-hour day.

I've broken the overwhelming order down into its smallest parts, and I keep looking at it, looking at it, and looking at it again. The more I look at it, the more I feel like I may actually pull it off. As I've been spending hours and hours with myself in the studio, I've started working on my attitude. Part of the reason why I took a month off from the making work was to get some perspective. My stress levels have been getting cranked all year from studio issues: not having enough assistance, nagging glaze issues, misbehaving cake stands and the relentless orders for them... all of it has made me feel like failure is the default setting, while success is something always just out of my grasp. Talk about lack of perspective... for every failure out of the kiln, there are probably 20 successes, but when you start losing your mind, all you see is the failure.

The failure mind set is completely debilitating and also totally self-fulfilling. As I deal with the overwhelming order and a few others that came in on its heels, I've been asking myself how I can think about my situation in a more positive light, starting by just appreciating that people actually want to buy my stuff at all. I a 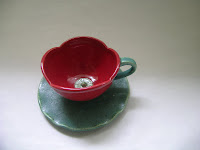 lso try to see all the pieces finished on time, perfectly fired. And normally I would hedge a big order by making a bunch of extra pieces. I recently read a brilliant article by Sequoia Miller in the current issue of Studio Potter magazine about this very practice, and what a waste of time it can be. I really don't have time for hedging right now, I want to count on things coming out right the first time.

So right now it's all about long solid days in the studio, deep breathing, positive visions, 8 hours of sleep, and not toooooo many martinis!
written by Whitney Smith at 3:02 PM 9 comments: Links to this post