I've been noticing lately that I've been falling back into workaholic habits: long hours at the studio, sneaking over there on the weekends to finish pieces, cutting lunch short so I can get back to work, and feeling agitated when things come up that take me out of the studio. Like last week, I woke up Tuesday morning to an eye that was swollen almost shut. I was diagnosed with preseptal cellulitis and given an antibiotic. The next day I woke up with both eyes swollen and an ugly rash on my face, neck, arms, and legs. Allergic reaction to the antibiotic. My left eye was so swollen I could barely see out of it, so I slapped a bandage over it and went to work. With no depth perception. I realized at the time that was not the right thing to do for myself, and I should be home resting. But really, I am so into what I am making these days that I am indulging the workaholic for now. Frankly, I'm just happy to know that I can still be this excited about clay again. 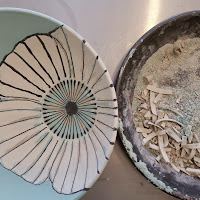 Something broke open for me about 6 weeks ago or so. I listened to an interview with Kim Werker, who wrote a book called Make It Mighty Ugly. Apparently, it's a book she wrote just for me, all aimed toward my personal demons: perfectionism, fear of failure, stopping before I start because of the voices in my head, blah blah blah. I've had several people tell me that I need to make something ugly, to get past that shit, and I resist that idea so much. But the way Kim talked about it made me realize that it's not about making something ugly on purpose, it's about making something and not being afraid that it will be ugly.

I've been drawing and making designs on pots for a while, and I know I can make something really beautiful and nice to look at. But there is something about these designs that bore me to death. It started when I was working on my grandma's urn last year: I made the urn with a perfectly designed trillium flower all around, and I hated how it looked. So perfectly boring. My hand, almost on its own, scratched it up. I liked it much better, and left it at that. 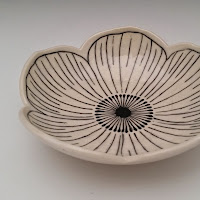 This year, I've been working on mishima concepts, and I really love the process. It's insanely labor-intensive, but the results are lovely and I'm having fun re-interpreting my work through this new design process. But, I'm running into that same wall of things looking perfectly boring. The work, though enjoyable and beautiful, feels like a dead end design-wise.

I had a couple of pieces in the studio that I had reserved for "fun". Meaning I could do whatever I wanted with them and they didn't need to fit into any category of work that I've made before. I kept pulling the pieces out, and just staring at them. Nothing was happening. Weeks went by. It wasn't until I listened to Kim that I was able to pull those pieces out and do the work. I still struggled with the voice telling me to not screw it up, but I worked through the first wall and made some work that was kinda ugly, and it helped push me to a different level. 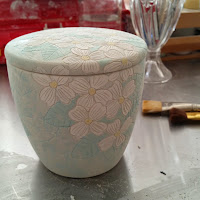 The main thing I got out of it was to not judge the process or the work-- not before, during, or after. Judging is a preclude to letting the voices take over and shutting down the creative process. A couple of weeks ago I had an idea to make some small dishes carved out like Art Deco roses. Immediately the voices started in on how the concept was too simple, too obvious. Judge judge judge. I was able to override the voices and make the pieces anyway, and it is their very simplicity that makes them so awesome. I finished some other pieces last night and I was having that anxiety around feeling like they were not the way they "should" be. I caught myself judging, and stopped. The work is just what it is. It has no intrinsic value one way or the other other than to teach me about what I want to do next.

And fuck it anyway. I have Open Studio this weekend and the work is going to be finished and shown no matter what. Come see me if you can! 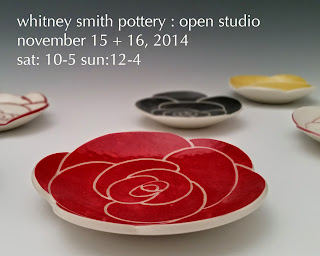 written by Whitney Smith at 7:10 AM 2 comments: Links to this post