There's a lot going on with me right now.  Actually, there's only one thing going on, which is I'm getting ready to leave for France on May 17 for a 5 week residency.  Plus, 5 days in Paris. There are many tangential activities associated with my trip that makes it count as four or five things.  Today, I'm going to make a list of all the things I need to do before I leave. Lists soothe me. If I were a cat and you wanted to soothe me, you should pet me. If you want to soothe my human being self, hand me a clean sheet of paper and a nice pen, so I can make a list.

One of the things I am trying to accomplish before I leave is getting back all the French I learned in high school, which has since been displaced by Spanish.  I've been doing the Pimsleur program and now, there's just a big bowl of all kinds of words in different languages sloshing around my brainpan, though I do know how to fluently order wine and beer.

As a teenager, I was fascinated with France. I took French through most of high school and tried to convince my mother that we probably were of French extraction, somewhere in our background, though we are clearly anglo-saxon in every way.  I felt a natural affinity for the French culture, even though I understood only the most superficial things about it, like the French really love cheese, dress better than Americans, are snooty and disdainful, make weird movies with no endings, and take long lunches.

Now that I'm finally going there I've been doing an immersion in French cultural studies and beginning to slightly understand what makes the French tick.  For reasons due to my own extreme ignorance, I always assumed the French were like us, just more a more sophisticated, better-dressed, disdainful cheese-eating version.  But their culture is not Anglo-Saxon, it has a completely different underpinning, and once I understood that, it was like someone handed me a tiny key.  Oooooohhh, they are actually not like us, and the way  go about in my own culture does not translate the same way in theirs.

For example, my assumption that maximum efficiency is valuable in and of itself, and is naturally the goal of any transaction or undertaking.  That's a cultural value, not something that is just a natural goal of every human being, though it feels like it should be.  The French are not naturally interested in efficiency as a goal, they are interested in other things, which I will report back about once I have done some observation.  And it will have to be observation, because I've learned that the French are much more private and reticent with strangers than Americans.  Even asking someone's name can be an affront, so it's not likely that I will be able to interrogate anybody about how they move about in their culture, which is my anglo-saxon way of getting information.

Meanwhile, I've been working away in the studio, repairing my relationship with Cake Stand. Yes, we are back together, and it's better than ever.  Cake Stand has really changed, and I just want to be with Cake Stand all the time. I think the only thing I've made for about a month now is cake stands, it's the only thing I'm interested in at the moment. So if you want to order something before I leave, make sure it's a cake stand so I can get rid of these things! 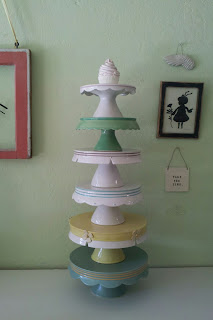 I received this seemingly innocuous email this week:

Please provide a tracking number for PO 666.
Currently the ETA on this PO is 4/10, which means it would had to have shipped on Tuesday to arrive in time.  We need to know the status of this order immediately.
Thank You,
Annoying Fulfillment Manager of Very Large Store

Why did this email put my teeth on edge? Potter types already know. The not-so-subtle pressure to get an order out according to a retailer's own fulfillment schedule.  And I say "their" fulfillment schedule because I never promise hard ship dates, and in this case the 4/10 arrival date is a figment of some body's imagination. I always keep fulfillment dates loose to give myself the space I need to create these wholesale orders.  When planning orders with wholesale clients, I always say, "about 3-5 weeks" or whatever the time frame is, the key word there being "about."  Also, please note the "-" which means there is a 14 day leeway.

This makes me difficult to work with, yes, and I like it that way.  It filters out the riff-raff.  Also, I have a secret weapon, and this is what it is:  I don't give a shit about getting wholesale customers, or keeping them.  It's a defense mechanism that keeps me from losing my mind with wholesale clients. Wholesale is a pain, and I only work with people who I really like and who I think respect what I do and how I do it.  The most important clients to me are my own retail customers, the people who come to me directly and pay my full retail price. They are the ones who give me 85% of my income, and who have helped me build my business into what it is today.  They are also the ones I will turn myself inside out for to get an order to them on time.

The most stressful periods of my work life have been because of difficult orders with difficult wholesale clients, and I developed PTSD-like symptoms because of my experiences with them.  So reading this email, as mild as it may seem to some of you, sets off a stress reaction that is out of proportion to the situation.  I woke up at 4 this morning, burning with resentment, remembering that this retailer has already been put on probation after they were being ridiculous about an order a few years ago.  I told them at that time I would not be filling their current order or any orders in the future, and they actually pleaded with me to re-consider and promised to straighten up, which they have until now.

These stores want to sell the best stuff they can get their hands on, and find people like me to work with so they can deliver a unique and special item to their customer, yet they can't wrap their heads around the fact that I'm not cranking out a widget in a factory. And this person is clearly under the illusion that they are my boss or something, and I'm going to respond to pressure, or rush their order, or somehow work faster.  I'm the boss. I respond negatively and even passive-aggressively to pressure, and I do not work any faster  than I am already.

Dear Annoying Fulfillment Manager,
The status on your order is the same as when I first responded to the order: it will take 3-4 weeks to make and ship immediately thereafter. At this time I expect your order to ship sometime next week.  I do not commit to hard ship dates, as you should be well aware of after working with me for 3 years. Please keep that in mind when making status inquiries in the future.
Thank you,
Whitney
written by Whitney Smith at 7:41 AM 9 comments: