hole in my head, bubbles in my brain

I had a tooth pulled last week to make way for an implant.  I was told the Chinese regard losing a tooth as an event that signals change in your life.  Since I'm not Chinese, I regard it as an expensive pain in the ass. Even so it does seem as though change is afoot.  I've been pushing for certain changes for years, and it seems as though there are areas of my life opening up and making way for some of these changes to finally happen.  But no matter what, change makes me uncomfortable. I can get very insecure and have moments of anxiety where I feel like I've lost my footing. 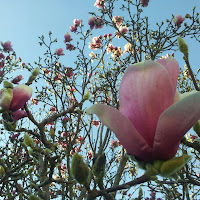 I've had to confront the fact that I've lost my drive to be in the studio all the time, and I'm thinking about other things to do with my life.  This means I've cut down my studio work to 4 hours a day, where I am mostly focused on custom and creative work, and Nikki takes care of production work and a lot of other stuff that I don't want to deal with anymore.  Basically, anything that doesn't have to get done by me, the smallest things, now get done by her.  The rest of the day I'm working on my writing.  And doing other things.   The great thing about working on writing is that anything you do can be something that can contribute to you being a better writer, so I can justify just about anything I feel like doing

So it's great, but still, it's change.  And a  lot of shit has been bugging me.  Like, sales are just slow right now.  I go through periods of hyperactive sales and then, no sales for days.  Days!  It freaks me out and makes me angry.  Actually, it makes me sad.  I'm trying to pay more attention to how I actually feel.  I often insert "angry" for every slightly negative feeling because at least then I can feel powerful.  I mean, people get scared when I'm angry.  Not so much when I'm sad.  Then I'm just pathetic and people pat me on the back to make me feel better.  And it does make me feel better, to get patted on the back and told, "It's going to be okay."  That's what everyone says. 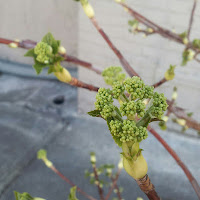 I've been coping with the fear in my meditation practice rather than screaming at my husband and stupid drivers on the road, which everyone appreciates. The thing about sitting in meditation and just breathing is that while you try to empty your mind, shit is constantly bubbling up.  The comic Bobby Lee actually said in an interview that when he meditates, he views all his thoughts as bubbles and he just pops them and gets back to meditating.  Until he has to pop another bubble, which he inevitably will throughout his meditation.

So I keep having this fear about my slow-ass sales bubble up, and I acknowledge the fear and accept it, and then I pop it.  10 seconds later the same thought comes up and I have to go through the whole fucking thing again.  And again.  And again.  Really, it's annoying.  I'm like, "Yeah, I know I have fear, I have insecurity, and I can let it go and be in the moment instead of  freaking out.  Do you think you could back off now??!!"  There's the anger again.  Two more steps back from enlightenment.

Before all of you supportive and wonderful people who read my blog rush forward to give me the virtual pat on the back-- which should be it's own word in the dictionary-- I should mention in some ways work is really great.  I have a big project in the pipleline with a major retailer, and I'm sending off a big fat order to my first store in Paris.  And I'm going to Paris in a couple of months and then heading down to the south of France for a ceramic residency for four weeks.  So even though I may act pathetic every once in a while, don't feel sorry pour moi.  And my suggestion for a word describing a virtual pat on the back is e-pathy.  Got a better one?
written by Whitney Smith at 4:13 PM 12 comments: