my name is whitney and I'm a {recovering} workaholic

I'm a recovering workaholic.  I used to work a minimum of 10 hours a day plus weekends.  10 hours a day probably doesn't sound like much to the workaholics who work 18 hour days, but I am a very lazy person, so for me a 10 hour work day is crazy.  I cut back on my schedule when it became obvious that everyone and everything that was not clay was just annoying.  This meant that when I wasn't working, I was annoyed.  Not unlike a junkie who cannot get a fix. Hard to enjoy life with an approach like that.

Since I  became a recovering workaholic, I'm always re-jiggering my schedule.  It's a constant effort to balance meeting the obligations I have to my work while not becoming a slave to it.  There are a lot of other things I want to get done every day besides working with clay:

It occurred to me recently that the day is simply not long enough to do all I want to do.  And if it were "long enough,", then it would just be exhausting, or we would just be another kind of species that only needs 3 hours of sleep a night.  And still, I would want an even longer day.  So the struggle is to be satisfied with what I have-- a really short day-- and also be realistic about what can be accomplished in any one day.  And this is the tricky part: not beating the crap out of myself for not managing to cram 14 hours of activity into 8 hours. 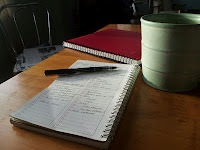 Days melt away, then weeks, months,  and years.  It creates the unstoppable flow of time, and it's so easy to float and bob on the surface of it, either getting carried away by the juggernaut of daily accomplishments, or just giving up and not being driven to do much at all.  I have both kinds of days.

And then the other kind, the good kind of day where I maintain my focus and awareness,  and get about half the stuff done that my most driven self want to accomplish while doing twice as much as my most lazy self wants to do.  One thing that has been helping me a lot lately is a simple day planner.  I know a lot of you have been on to that one for years and good for you.  I bought this one last year and I like how it has a limited amount of lines for each day, and a place to cross stuff off.  I've started carefully planning each day, usually starting the day before, and I'm telling you, shit gets done. And I know that when I start cramming more than 4 or 5 things on there, I'm asking too much and shit ain't gonna get done. So it's an exercise in restraint and organization, which for a recovering workaholic, is almost as good as a 10 hour day.
written by Whitney Smith at 6:27 PM 13 comments: