20 years ago today, I was a few months past turning 19, and had been living in Santa Cruz, California for just over a year. I had moved myself to Santa Cruz from the east coast because I wanted to live in California 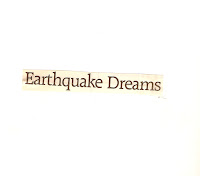 since I was a kid, and Santa Cruz sounded like just the place that would fulfill my fantasy of living next to the ocean, in year-round temperate climate, with the added bonus of being surrounded by cute surfer boys, cute boys being the biggest weakness in my life at that time. Like most childhood fantasies, the reality of my still-new California life was proving to be more difficult and not as exhilarating as I hoped. 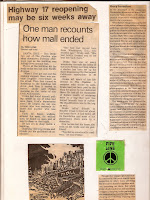 What had the most impact on me was a complete shift in my perspective on life. We all know that the only thing that truly matters is having your health, family and friends, alive and safe. But to 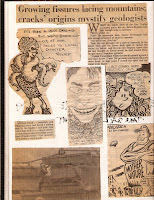 know that mantra, and then to have an experience which really makes you understand what it means are two different things, and up until that point I did not understand what the concept meant. This sudden knowledge freed me from many of my everyday worries and concerns as I experienced the intense rush of appreciating being alive and focused on being a support to others. The community of Santa Cruz bonded in the days after the quake, and I felt the love and concern of my friends and neighbors in a way that I never had before. The experience cemented many of my new relationships, including the one with my neighbor, JT, still one of my closest friends. JT and I became roomies for about 6 years after the quake because his house fell apart and we both hated our rent-gouging landlord. Probably the hardest thing for me about the Loma Prieta quake, aside from having to wrestle with my own terror of realizing what it meant to live in earthquake country, was the disappointment and feeling of loss as my community gradually went back to normal with the passing weeks and months.

I don't have a neat ending to this story. It's just a part of my life that I consider one of the most important things that ever happened to me, and I like to share the story with anyone who will listen. I kept a detailed diary during this time, that is where these images are from. You can click on them to read them more closely. The last thing I wrote was dated 12/7/89:

I'm having flashbacks constantly. Wherever I'm at, and the earth moves with aftershocks, I can see in my head the vases of flowers falling down, the glass cases crashing, a terrible noise with the earth roaring. However, my terror has subsided immensely, leaving only anticipation.
written by Whitney Smith at 1:00 PM 7 comments: Links to this post