I've been reminded that I have a blog and people like it when I post every once in a while. It's not that I don't have anything to say, there has just been a lot going on. I'm getting ready to leave 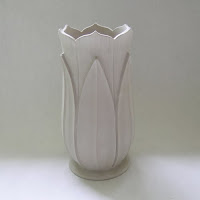 for a 3 week trip to Europe in 7 days, and there's a lot of prep that has to happen because I'm leaving my helpers to manage things. Which makes me nervous. And testy. To deal with my testy nervousness I've been making martinis that are so strong they make my face numb. Martinis are really not a drink you should get into the habit of drinking. I wake up in the middle of the night apologizing to my liver and to the brain cells that I just killed, I feel so guilty when I drink like an alcoholic. And the most unfortunate thing of all is that it helps not at all for long-term relaxation.

Despite the hectic schedule, I feel like nothing is getting done, which is my default emotion for when I'm trying to do too much with too little time. People have been getting on my nerves, but I manage to maintain a superficially sunny exterior so no one gets hurt. I had my first negative feedback on etsy a few weeks ago. I already know there are unhappy customers out there, because I usually hear from them. This one, I heard nothing, just an ugly red "negative" post on my feedback page, with no commentary. I wrote the person immediately to ask them what was up, even though I was 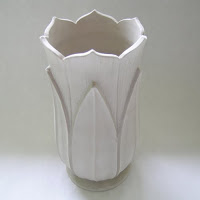 inclined to just ignore them since they already left negative feedback. But that would be poor customer service, and I never intentionally give poor customer service. Unless you are being such a bad customer that I have no choice. They wrote me back to tell me the creamer cracked-- or something, it was actually not totally clear what happened-- and it wouldn't hold liquid, so they were disappointed. I was so irritated by their total lack of recognition that they had other ways to deal with this--like maybe contact me so I could send them a new creamer--that it took me 4 days to respond. Taking that long to write a customer back broke my 24 hour rule, but every email I wrote was so hostile that I couldn't send it. I finally managed something bland and inoffensive:
I can't say for sure what happened with your piece unless I looked at it. Clearly, it seems you received a very rare defective item since all of my work is made to be useful and functional, not just something pretty to look at. I will replace the creamer, I hope that will resolve the issue. Let me know if this solution works for you and we will go from there.
Never heard back from the former customer, so fine, fuck off. Live with your cracked creamer. 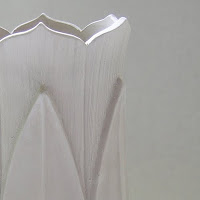 anniversary event and one of my good, long-term customers asked me to design an exclusive vase for them that would be sold as a fund-raising thing. Time to call in the Hector! All of these images are of the prototype vase I slaved over. The only unfortunate thing about this order is they want it glazed in the "bad boyfriend" glaze. I almost immediately started thinking about the brain cells that are serving me well today, but will die tomorrow as more rivers of vodka pour down my throat while I wait for kiln loads of vases covered in matte green glaze to cool down. I attempted to talk them into something else, but it's true that this vase will look best in the matte green glaze, so I had to concede. And then I immediately recruited Hector to do the glazing part too. I am merciless.
written by Whitney Smith at 6:27 PM 15 comments: