It's been over a year and a half since my mom died, and lately I've been feeling like my body is coming back down to earth. I've been feeling a little more grounded and ready to take on some things that seemed way too overwhelming even six months ago. I'm looking around, sort of the way I do when I wake up, and realizing there are many costs to the grieving process. You can't do anything about that, by the way. There is no way to grieve and not lose some shit along the way. I'm not saying you don't get some shit too, you do get something, just not the things you wanted.

The main cost to me, outside of losing my mom, has been losing my sense of direction in my work. For almost two years now I've been making stuff, it comes out of the kiln and often I have no idea why I made that thing. For example, I decided to make some whiskey cups. I spent some time coming up with a design, made them, and when they came out of the kiln I was like, "Why the fuck did I make these?" They are in no way an expression of anything I am interested in right now. I don't even LIKE whiskey. Why whiskey cups? I don't know, and I don't remember what I was thinking when I landed on the idea. I went and bought a bunch of mini succulents and planted them in the whiskey cups, which is a better use of these pieces as far as I'm concerned.

And yes, I know, they don't have to be WHISKEY cups, they can be any kind of small cup. No matter what you call them, I'm really not into making little cups. 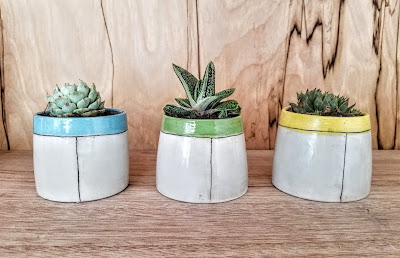 My studio feels like a jumble of random thoughts and ideas, manifested in pottery. I spent a very long time the other day re-arranging my work on the shelf so it looked like one person worked there and not 7 different people. I was visually trying to link of the concepts and colors, which actually did make the display look better but does not solve the underlying problem. Or maybe it's a question: what next? 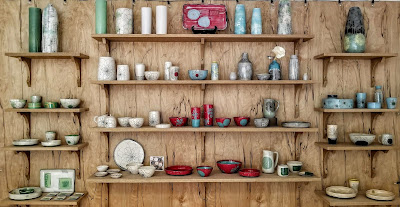 I know for starters, I do not want to make small work anymore. And I mean that in the physical sense, like whiskey cups and little condiment plates. And perhaps I also mean it in the metaphorical sense: I want to break out of the box I've put myself in. My comfortable, cozy, familiar little box. I want to make bigger work-- big giant bowls, big vases-- but I also want to make wall pieces and lighting and maybe weird ceramic furniture too. Also, I want to take my drawings and turn them into cards and other paper stuff. I've been saying this for a while, and now I'm saying it to you all because getting out of your box means being opening the flap enough to stick your head out and admit that it's time. It's accountability.

All of this makes me very uncomfortable, of course. And excited for what may be next, if I can ever get my shit together enough to make something new happen. Not having a cohesive collection of work makes me feel like I have not accomplished much in the past 18 months, which equals discomfort. While I don't think "accomplishing" was the most important thing I could be doing while I was in the depths of grieving my mother, I'll just say again that it was a cost. It's the price I had to pay. And the process is not over, but it is shifting into new territory. And it leaves me wanting a little more for my life.
written by Whitney Smith at 2:51 PM 2 comments: Links to this post